Make a list of places having hot springs. What are the reasons for these being located here?

The town here was originally called Vadvali. The Shree Vajreshwari Yogini Devi Mandir is a Hindu temple devoted to the goddess Vajreshwari. It is in the town of Vajreshwari, on the banks of river Tansa, which lies in the Thane district, Maharashtra, India. There are about twenty-one hot water springs in a five-kilometre radius of the temple. According to tradition, the hot water is the blood of demons and giants who were slain by the deity Vajreshwari. According to scientists, the main reason for hot springs is because of their nearness to the former volcano in the region accounts for their creation.

Unapdev is in Shahada, Maharashtra Tahsil situated near the village Dara. It has a stable natural hot water source. It always has water starting from a structure in the figure like a cow's mouth. Unapdev is famous for the Hot Water Spring. Sunapdev and Nijhardev are two further hot water springs in the same area. They are situated in the Satpada hills. In the Jalgaon area, hot springs contain so far been recorded at Unabdev, Sunabdev, and Najhardev in Chopda.

The springs are in a wide, pleasant valley, clustered around the temple of Rameshwar. Therefore they are also known as Rameshwar hot springs. The water of hot springs has been gathered into cut-stone cisterns. The hot springs at Akloli are positioned on the left bank of the Tansi River. Since it is located near to Vajreshwari hot springs, the same reason exists for the hot springs of the Akloli Kund.

This hot spring is also located in the bed of Tansi River. In Ganeshpuri village just at the back, the main temple has a small Shiva shrine with tanks in front that holds the water of the hot-water springs. The hot water is 52°C. Agni Kund is an additional hot water spring close to the village. There are some hot springs that bubble up in spherical holes melted out of the black volcanic rock there; this is the main reason for the hot water spring in Ganesh Puri.

There are remains of a Hindu temple at the hot spring area, with two broken bulls (Nandis), and two broken lingams. This was called the Satoleshwar Mahadev temple. The major spring shows profuse gas emission. On the hot spring has constructed a concrete tank to safeguard the human activity. There are three large and three small tanks opposed the temple. The small tank to the left has hot water, and steam rises up from it. The other tanks have comparatively warm water. This hot may be due to pressure from the earth’s crust; the high pressure of from the earth makes the water hot in the crust.

How useful is this solution?We strive to provide quality solutions. Please rate us to serve you better.
PREVIOUSExplain how relevant is the concept of “Atithi Devo Bhava” (Guest is our God) with respect to tourism.NEXTThe tourism map of Maharashtra is given. Answer the following questions based on the map.At what places do you find the correlation between transportation routes and the development of tourism?
Try our Mini CourseMaster Important Topics in 7 DaysLearn from IITians, NITians, Doctors & Academic Experts
Dedicated counsellor for each student
24X7 Doubt Resolution
Daily Report Card
Detailed Performance Evaluation
view all courses

To seek treatment in a naturopathy centre, John and Amar went to Kerala

Make a list of places having hot springs. What are the reasons for these being located here?

Explain how relevant is the concept of “Atithi Devo Bhava” (Guest is our God) with respect to tourism.

Make a notice board containing instructions for tourists at a tourist place. At what places do you find the correlation between transportation routes and the development of tourism?

Pundalikrao accomplished the Char Dham Yatra with his family

Portuguese tourists had come to Goa to participate in the Goa Carnival. 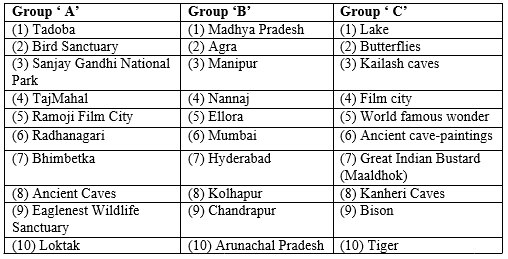 Differentiate between religious and cultural tourism.