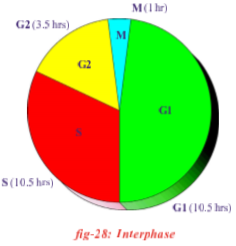 a) Interphase: it is the period between two cell divisions. This is a period where genetic material makes its copy such that it is equally divided among the two daughter cells formed during cell division. It consists of three stages-

•G1 phase: this is the linking period between completion of mitosis and the beginning of DNA replication (Gap1 phase). The cell size increases during this period.

•S-phase: this is the period of DNA synthesis (synthesis phase) leading to duplication of chromosomes.

•G2 phase: this is the time between the end of DNA replication and beginning of mitosis (Gap2 phase). Cell organelles divide and the cell prepares for mitosis.

b) M-phase: It is the phase of cell division or mitosis and consists of 2 stages- karyokinesis (nuclear division) and cytokinesis (cytoplasmic division). Karyokinesis is further divided into 4 stages namely- prophase, metaphase, anaphase, and telophase.