The sign conventions that are followed in case of refraction of light through spherical lenses are as follows:

1. All the distances are measured from the optical centre of the lens.

2. All the distances which are measured in the same direction of the incident light ray will be taken as positive.

3. All the distance which are measured against the direction of incident light are taken as negative.

Magnification is given by

Since image distance is positive, so it will form on the right side of the convex lens.

The ray diagram will be as follows:

Image is formed 80 cm from the lens on the opposite side of the object, i.e. on the right side of the lens. 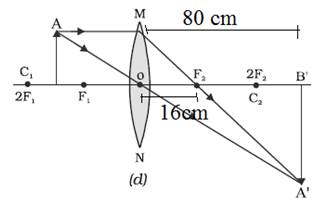