The salient features of double helix structure of DNA are:

a. It is made of two polynucleotide chains where backbone is sugar phosphates constituted and bases project inside.

c. The two strands are coiled in right-handed fashion and are anti-parallel in orientation. One chain has a 5’—>3′ polarity while the other has 3’—>5′ polarity.

e. The distance between the base pairs in a helix is 0.34 nm. A complete turn contains approximately ten base pairs. The pitch of the helix is 3.4 nm. 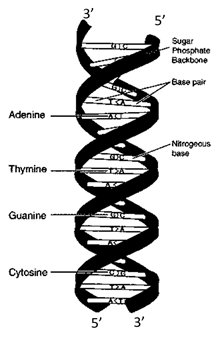 The three structural genes of lac operon are z, y, and a. The ‘z’ gene codes for beta-galactosidase (β-gal), which is primarily responsible for the hydrolysis of the disaccharide, lactose into its monomeric units, galactose and glucose. The ‘y’ gene codes for permease, which increases permeability of the cell to β-galactosidase. The ‘a’ gene encodes a transacetylase.

Lactose acts as the inducer that binds with repressor protein and frees the operator gene. RNA polymerase freely moves over the structural genes, transcribing lac mRNA, which in turn – produces the enzymes responsible for the digestion of lactose.

Figure 4. Activation of Structural gene in presence of lactose in lac operon.