The anterior portion of sclera (the external layer of eye ball) is called cornea.
The eye ball contains a transparent crystalline lens which is held in place by ligaments attached to the ciliary body

The inner layer of the human eye is the retina.

The space between the cornea and the lens is called the aqueous chamber and contains a thin watery fluid called aqueous humor.

The space between the lens and the retina is called the vitreous chamber and is filled with a transparent gel called vitreous humor.

Blind spot is the small region in the eye where photoreceptor cells are absent. Therefore, there is no photo detection in this area. 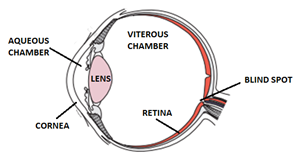 Which cells of th

The organ of cort

The letters of th

What are the ince

If you were to wr

Why does the auth