In Chapter 6 of KSEEB Class 8 Maths textbook Theorems on Triangles, you will study about theorems on triangles. Recall from the previous classes that there are three types of triangles based on their measure of interior angles- acute-angled, obtuse-angled, and right-angled.

Based on the length of the sides, there are three different types of triangles which are scalene, isosceles, and equilateral. In a scalene triangle, none of the sides is equal in length. In an isosceles triangle, two sides of a triangle are equal. A triangle is said to be equilateral if all its sides are equal in measurement.

As we have revised the basic concepts, let us now proceed with the list of triangle theorems that you will study in Chapter-6 of KSEEB Solutions for Class 8 Maths.

In this chapter, you will study three theorems that revolve around triangles.

Theorem 1: The measure of the sum of three interior angles of a triangle is 180 degrees.

Theorem 2: In an isosceles triangle, the base angles are congruent.

Theorem 3: An exterior angle of a triangle has an equal measure to that of the sum of its corresponding interior angles. 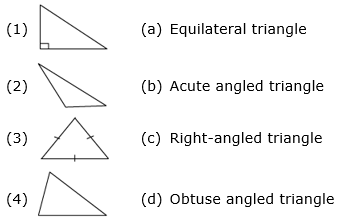 Based on the sides, classify the following triangles (figures not drawn to the scales).

Our Karnataka Board Solutions for Class 8 have been prepared by Gopreps expert faculty who have had years of experience in teaching. We have made our best attempt to offer step-wise solutions so that students can understand each step clearly. You can find KSEEB Solutions for all the chapters of Class 8 here.

In the first exercise of KSEEB 8th Maths Solutions Chapter 6 Theorems on Triangles, you will find questions based on types of triangles. The second exercise contains questions that will require you to apply theorems to find the measurement of the remaining side or angle. The last exercise of Chapter 6 Karnataka Board Class 8 Maths textbook contains questions that will require to apply the linear pair and exterior angle properties.