Class 9thAll In One - Science6. Tissues

Since, John had started walking voluntarily; The tissues which facilitated the movement of his bones are Skeletal muscles and nervous system.

Skeletal muscles are anchored to the bones and helps in voluntarily movements and since command for this voluntary action is given by nervous system neurons were also involved in the movement of bones.

(i) Diagram of the skeletal muscle is as follows: 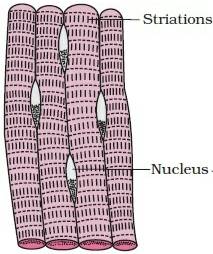 (ii) Values shown by John are intelligence, ability to take decision and giving quick response. As some unknown faces started following him, he started walking fast to overcome the coming problem or difficult situation. Here, he had shown his intelligence in taking decision to move away from those unknown faces as soon as possible. He had also did this immediately without wasting his time so, that he can overcome the coming problem.

How useful is this solution?We strive to provide quality solutions. Please rate us to serve you better.
PREVIOUSRicha tried to beNEXTContractile prote
Related Videos

Get To Know About Nervous Tissue38 mins

What is the numbe

What is RBC count

How are two bones

A person is carry

Which groups of F

AD is an altitude