Class 10thRajasthan Board Social Science1. The Golden India-From The Beginning to 1206 AD

The Mahajanapada period in Rajasthan was from 600 BCE to 300 BCE. The term Mahajanapada means “foothold of a tribe”. There were 16 mahajanpadas during 600 BC to 300 B.C.

1) Vedic texts explain that Aryan tribes were known as the Janas. Janas was the largest social units.

2) The term janapada composed of janas means “people” or “subject” and pada “foot”.

4) Janapada's were the most primitive gathering places of men, merchants, artisans, and craftsmen parallel to marketplace or town bordered by hamlets and villages.

6) A janapadin was the ruler of a janapada.

7) Ancient Sanskrit texts like Ashtadhyayi, Ramayana, Mahabharata, and Puranas refer to many Janapadas of ancient times.

8) The Indian subcontinent was divided into the Janapadas with clear separated boundaries.

9) The vedic literature describes the nine janapadas besides such people as the Andhras, Pulindas, Sabaras and Pundaras.

With the development of large territorial states, janpadas became more powerful and turned into mahajanpadas. The Sixth century BC onwards, the widespread use of iron in eastern UP and western Bihar created conditions for the formation of large territorial states. There were 16 mahajanpadas during 600 BC to 300 B.C. Early Buddhist and Jain literature have descriptions about them. Those were as follows: 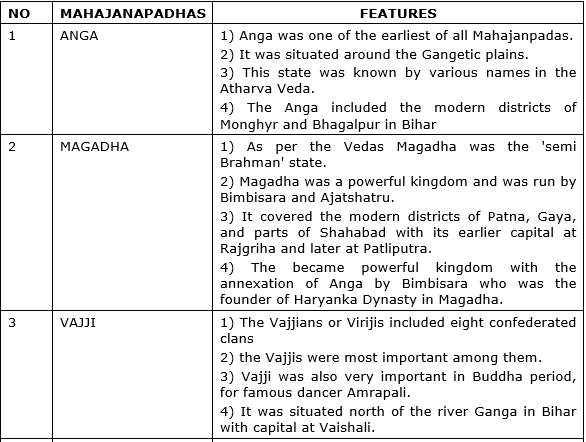 These are the details about the mahajanapadas. These were well-built political bodies with authority. They were spheres of the republic in ancient India.

What is the other

Give a brief intr

Write a brief not