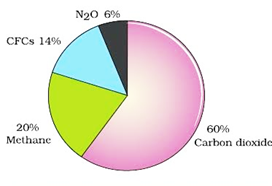 • Clouds and gases reflect about one-fourth of the incoming solar radiation.

• Some of the solar radiation is absorbed. But almost half of it falls on the Earth’s surfaces heating it. And therefore only a small proportion of it is reflected back.

• Earth’s surface re-emits heat in the form of infrared radiations.

• A part of the re-emitted heat does not escape into space because; atmospheric gases like methane and carbon dioxide absorb a major part of it.

The two types of population interactions are –

Justifications as to why (b) is important in an ecological context-

• Predation can be thought as the nature’s way of transferring energies to higher trophic levels which is fixed by the plants. Therefore, it acts as conduits for energy transfer between the different trophic levels.

• Predators help in maintaining species diversity in a community by reducing the competition among the prey species which compete for food and resources.