In which pair most efficient packing is present?
A. hcp and bcc

B. hcp and ccp

• In hcp (hexagonal close packing), the third layer and the first layer resembles each other in arrangement of the spheres and is able to cover all the tetrahedral voids.

• Since the pattern of spheres is repetitive in alternative layers, the stacking for hcp may be described as "A-B-A-B-A-B."

• The atoms in a hexagonal closest packed structure efficiently occupy 74% of space while 26% is empty space which is one of the efficient packings. 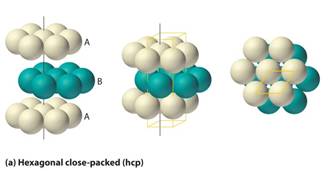 • The spheres in the third layer are not in line with those in layer 1, and the pattern of spheres does not repeat until a fourth layer is added. The fourth layer is the same as the first layer, so the arrangement of layers is "A-B-C-A-B-C." 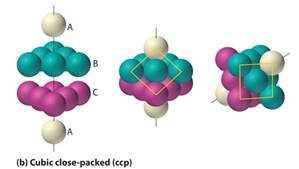 Explain why does conductivity of germanium crystals increases on doping with gallium.

An element crystallizes in a f.c.c. lattice with cell edge of 250 pm. Calculate the density if 300 g of this element contain

The percentage of empty space in a body centred cubic arrangement is ________.

In which pair most efficient packing is present?

Which of the following is not the characteristic of ionic solids?

Out of NaCl and AgCl, Which one shows Frenkel defect and why?