3. Nazims and The Rise of HItler

In what ways did the Nazi state seek to establish total control over its people?

After becoming the Chancellor of Germany in 1933, Hitler captured all powers. In this respect the actions taken were

(i) All political parties and trade unions were banned except the Nazi Party and its affiliates.

(iii) The Nazi rule glorified war and chose the path of war as a way out of the economic crisis.

(iv) Hitler introduced a massive programme of militarisation to enhance the military power of Germany and to restore its international honour and glory.

How useful is this solution?We strive to provide quality solutions. Please rate us to serve you better.
PREVIOUSExplain what role women had in Nazi society.NEXTExplain the impact of the First World War on European society and polity.
POPULAR QUESTIONS :
Q

When water gets solidified into ice, then heat is:

[Hint: Draw a line parallel to ST through point R.]

Convert the following temperatures to the Celsius scale:

What is the physical state of water at:

An umbrella is made by stitching 10 triangular pieces of cloth of two different colors (see Fig. 12.16), each piece measuring 20 cm, 50 cm and 50 cm. How much cloth of each color is required for the umbrella? 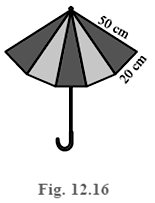 Arrange the following substances in increasing order of forces of attraction between the particles -water, sugar, oxygen.