In the given netw

To find the effective resistance of any typical network , first we should look out for small structures of the main structure which can be resolved and we should solve the question diagram by diagram provided each diagram is simplified from the previous one and don’t just interpret and solve some structures in between structures because there are no resistors in parallel or in series there they have more connections and it becomes more complex to solve from between, so try to solve from outside if it does not solve then go inside to simplify the whole structure, so, first solve the outer structures then go to the inner ones if the outer ones can be solved first.

RESISTORS IN SERIES HAVE SAME CURRENT AND

In this question the point can be any but from only A and B the two points given in the circuit because between these points there is potential difference , THESE ARE CALLED GIVEN POINTS between which we have to calculate the effective resistance. 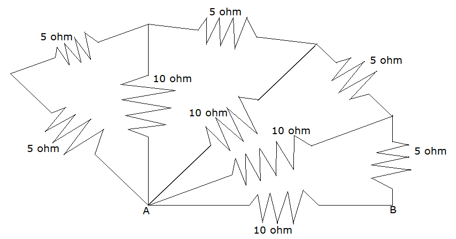 First the extreme left resistors will be solved as they are in series, so we will get, they will get added normally as integers. 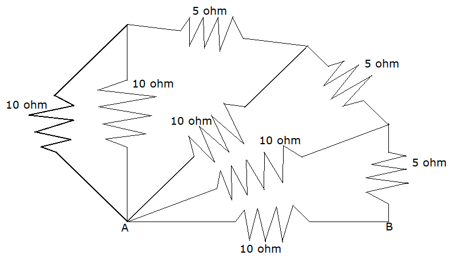 Now again the left most resistors are to be solved but now they are parallel and to be calculated by parallel method of evaluation. 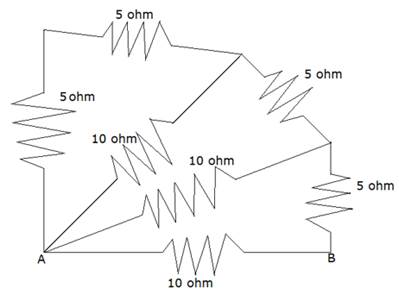 Now again we have to solve the left most two resistors at the top which are in series and will be added like integers. 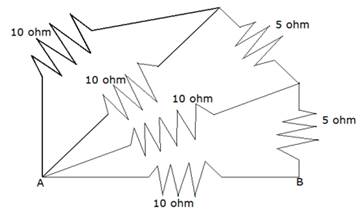 Now again solve the left most resistors which are parallel, we will get, 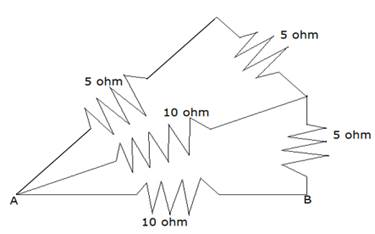 Now solve the resistors in series, which will be, 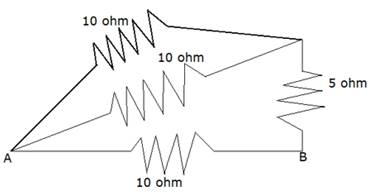 Now solve the resistors in parallel which are at the top, which are evaluated to,

Now add the two 5 ohm resistors like integers because they are in series, for the last time,

Solve the two remaining 10 ohm resistors which are in parallel combination to each other,

Thus, we get the resultant or the final calculated resistance.

In the given netw

A wire is bent in

A wire of resista