The gravitational intensity due to a body at a point is the force acting per unit mass on a body at that point or we can say it is force on a unit mass, it’s a vector quantity and its direction is same as direction of force on unit mass, so in absence if any external gravity if we put a point mass at centre of hemispherical shell it will be pulled downwards so Direction of field intensity is Downwards

Further to prove it if we take a uniform spherical shell of the same radius, at each point inside the hollow spherical shell, Gravitational field intensity will be zero as Various regions of the spherical shell attract the point mass inside it in various directions. These forces cancel each other completely.

Now the shell is spherically symmetric so if the upper half of shell, pulls a point mass towards it with the magnitude of Force F so same with the amount of force lower half of shell will pull it as shown in figure 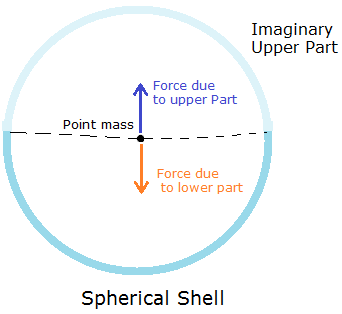 So if we remove the upper half of sphere there will force acting on point mass will be in a downward direction only, so that will be the direction of field intensity as shown by (c) in the figure Below

How useful is this solution?We strive to provide quality solutions. Please rate us to serve you better.
PREVIOUSWhich of the follNEXTFor the above pro
Try our Mini CourseMaster Important Topics in 7 DaysLearn from IITians, NITians, Doctors & Academic Experts
Dedicated counsellor for each student
24X7 Doubt Resolution
Daily Report Card
Detailed Performance Evaluation
view all courses

Is it possible fo

The centre of mas