Let Width of the rectangle = L

Area of the rectangle A= Lx 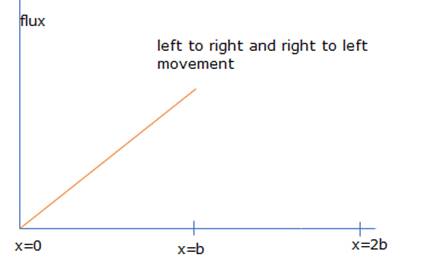 at any time, for x<b

From moving right to left,

Negative sign represents that flux will decrease with time. 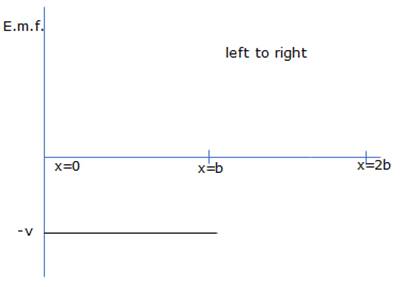 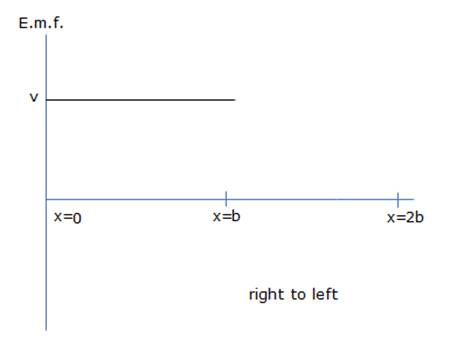 Cyclotron is a device which is used to accelerate the charged particles to very high energy. The principle it works on is that if a charged particle moves perpendicular to the magnetic field, it experiences the magnetic Lorentz force due to which it starts moving in a circular path. It is having two Dees, D1 and D2 which are enclosed in a chamber. The Dees are separated from each other by a small gap and the source of charged particle is placed in the centre of the gap. They are placed between the two big electromagnet poles to provide strong magnetic field. The magnetic field acts perpendicular to the plane of the Dees and the Dees are connected to a high frequency oscillator.

When a charged particle with charge q having mass m is emitted from the source, it is accelerated towards the Dee which have a negative potential at that time. Due to the perpendicular magnetic field, the particle experiences magnetic Lorentz force and it moves in a circular path. By the time the particle arrives at the gap between the Dees, the polarity of the Dees changes and the D at negative potential becomes positive and the D at positive potential becomes negative. Hence, the particle is once again accelerated and enters into other Dee with a greater velocity in a circle of greater radius. Therefore, the particle moves in a spiral path of increasing radius and when it comes near the edge, deflector plate is placed outside the Dee which helps the charged particle to come out. When the particle moves along a circle of radius r with a velocity v, the magnetic Lorentz force provides centripetal force.

Time taken to cover one half circle

Cyclotron is used to accelerate protons, deuterons and α–particles

A. Obtain the exp

In a cyclotron, a