In the cubic close packing, the unit cell has ________.
A. 4 tetrahedral voids each of which is shared by four adjacent unit cells.

B. 4 tetrahedral voids within the unit cell.

C. 8 tetrahedral voids each of the which is shared by four adjacent unit cells.

In arranging the layers of two dimensional close packed structures, the cubic close packed structure is formed when the third layer of spheres are placed above the second layer in a manner that its spheres cover the octahedral voids, where this third layer is not aligned with either the first or the second layer. Only when the fourth layer is placed on top, the fourth layer aligns with the first, forming an …ABCABC… arrangement. If we consider a ccp unit cell, we see that there are atoms present at the corners of the cube and also at the center of the faces of the cube. If we divide the cube equally in eight parts, we get eight cubes with atoms at alternate corners and each small cube has four atoms. If we joined the corners together, a tetrahedron would be formed. So the eight cubes would make eight tetrahedral voids and one unit cell of the ccp structure makes eight tetrahedral voids. The correct answer is (iv).

How useful is this solution?We strive to provide quality solutions. Please rate us to serve you better.
PREVIOUSWhich of the following defects is also known as dislocation defect?NEXTThe edge lengths of the unit cells in terms of the radius of spheres constituting fcc, bcc and simple cubic unit cell are respectively________.
Related Videos 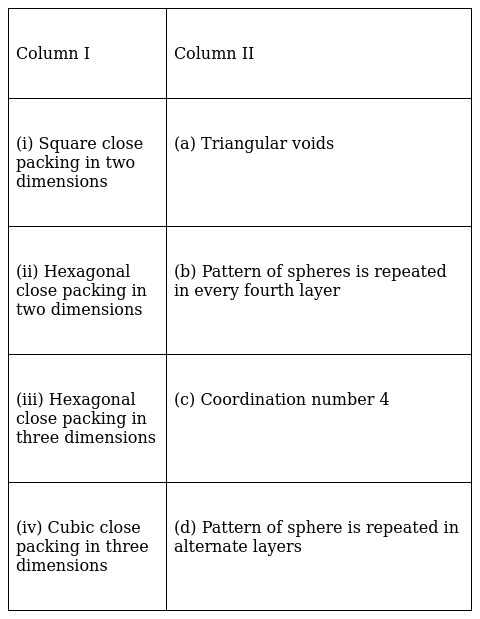 In which of the following structures coordination number for cations and anions in the packed structure will be same?