If another charged object carrying an equal amount of positive charge is brought in contact with the clip:

i. The negative charge which was given to the clip earlier will be neutralized.

iii. As a result, the diverged strips will collapse.

Note: When a number of positive and negative charges become equal, they cancel out each other. As a result, overall charge becomes zero which is called a neutral charge (neither positive nor negative) 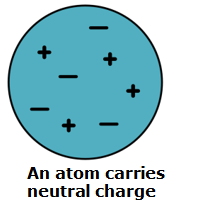 How useful is this solution?We strive to provide quality solutions. Please rate us to serve you better.
PREVIOUSExplain how does NEXTThe strips of an
Try our Mini CourseMaster Important Topics in 7 DaysLearn from IITians, NITians, Doctors & Academic Experts
Dedicated counsellor for each student
24X7 Doubt Resolution
Daily Report Card
Detailed Performance Evaluation
view all courses

How will you char

A plastic comb is

When a glass rod

A glass rod is ru

Explain why, a gl

When an object ge

Due to use of hig