In a plane electromagnetic wave, the electric field oscillates sinusoidally at a frequency of 2.0 × 1010 Hz and amplitude 48 V m–1.

(a) What is the wavelength of the wave?

(b) What is the amplitude of the oscillating magnetic field?

(a) Wavelength of the electromagnetic wave can be calculated as follows:

where c is the speed of light in vacuum

v is the frequency of electromagnetic wave

and λ is the wavelength of electromagnetic wave

On calculating, we get

Amplitude of the oscillating magnetic field is given by the following expression:

On calculating we get:

The energy density of electric field

is the permittivity of free space

The energy density of magnetic field is given as follows:

is the permeability of free space

The relation between Electric field and magnetic field i.e. E and B is as follows:

On squaring both the sides, we get following relation

A long straight cable of length l is placed symmetrically along z-axis and has radius a(<<l). The cable consists of a thin wire and a co-axial conducting tube. An alternating current

flows down the central thin wire and returns along the co-axial conducting tube. The induced electric field at a distance s from the wire inside the cable is

(i) Calculate the displacement current density inside the cable.

(iii) Compare the conduction current I0 with the displacement current

You are given a 2μF parallel plate capacitor. How would you establish an instantaneous displacement current of 1mA in the space between its plates?

Using B = μ0 H find the ratio E0/H0 for a plane electromagnetic wave propagating through vacuum. Show that is has the dimensions of electric resistance. This ratio is a universal constant called the impedance of free space.

A plane EM wave travelling along z direction is described by

(i) The average energy density of the wave is given by

(ii) The time averaged intensity of the wave is given by 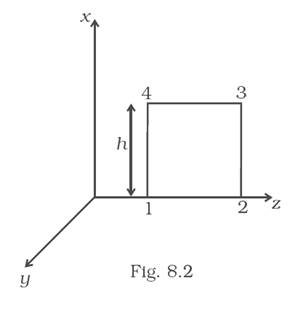 over the surface bounded by loop 1234.

(iv) By using similar process and the equation

A variable frequency ac source is connected to a capacitor. How will the displacement current change with decrease in frequency?

You are given a 2μF parallel plate capacitor. How would you establish an instantaneous displacement current of 1mA in the space between its plates?