In a Mendelian monohybrid cross, the F2 generation shows identical genotypic and phenotypic ratios. What does it tell us about the nature of alleles involved? Justify your answer.

In a monohybrid cross, starting with parents which are homozygous dominant and homozygous recessive, F1 , at the same time with incomplete dominance can show identical genotypic and phenotypic ratios.

Sometimes F1 had a phenotype that did not resembled either of the two parents and was in between them.The inheritance of flower colour in dog flower is a good example

In a cross between true breeding red flowered (RR) true breeding white flowered plants (rr), the F1 was pink. When F1 was self pollinated , the F2 resulted in the following ratio 1 (RR) Red : 2 (Rr) Pink : 1 (rr) White. Here the genotype ratios were exactly as we would expect in any Mendelian monohybrid cross; but the phenotype ratio had changed from 3:1 dominant : recessive ratio. Here R was not completely dominant over r and this made it possible to distinguish Rr as pink from RR (red) and rr (white). 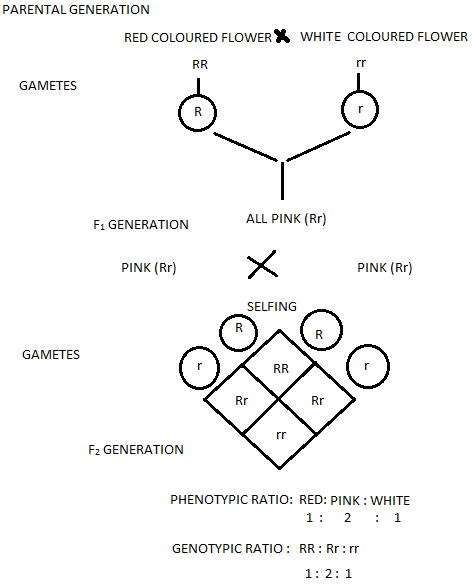 The genotypic and phenotypic ratios are the same as 1:2:1 in this example.

How useful is this solution?We strive to provide quality solutions. Please rate us to serve you better.
PREVIOUSHow does a mutagen induce mutation? Explain with example.NEXTCan a child have blood group O if his parents have blood group ‘A’ and ‘B’. Explain.
Related Videos

It is said that Mendel proposed that the factor controlling any character is discrete and independent. His proposition was based on the

How are alleles of particular gene differ from each other? Explain its significance.

Person having genotype IA IB would show the blood group as AB. This is because of:

A plant with red flowers was crossed with another plant with yellow flowers. If F1 showed all flowers orange in colour, explain the inheritance.

Discuss the genetic basis of wrinkled phenotype of pea seed.

With the help of an example differentiate between incomplete dominance and co-dominance.