A dipole is a system consisting of two charges equal in magnitude and opposite in nature i.e. a positive charge + q and a negative charge –q separated by some distance d

Electric dipole moment of a dipole is given by,

Where, ‘q’ is magnitude of either of charge (in column)

And ‘d’ is separation between the pair of charges (in metres)

We are given dipole moment of the system,

Now the total dipole moment equal to 10–7 Cm in the negative z-direction. 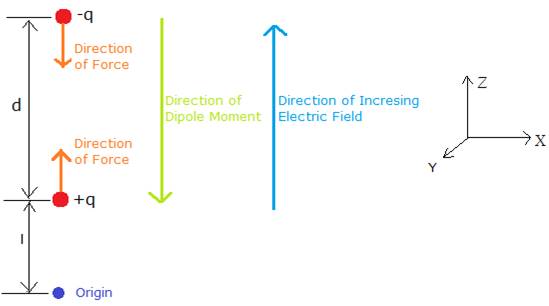 So net force on the system would be

So net force will be

Negative sign states that force is along negative Z axis , so the net force on the system is 10-2 N in negative Z direction.

which can be further evaluated as

is the Torque of the dipole

Where P is the magnitude of dipole moment

E is the magnitude of electric field

is the angle between Dipole moment and electric field

is a unit vector perpendicular to plane containing P and E

So whatever be the magnitude of P and E putting

So the torque of the system is zero

A. Derive the exp

(a) Draw the equi