Imagine you in a 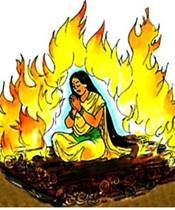 Sati is an evil practice that has been prevalent in the world for many years. It is a sad and pathetic system which is continuing in many countries of the world. In this system, if the husband dies, his wife also has to leave this world along with him.

'The man has already been laid down on the pyre. The woman is dressed up as a bride. She comes out of her house and walks silently towards the pyre. Initially, this was considered as a voluntary act. But later on, it became a forced practice. She is thinking about the strong pressure from the society that was executed upon her to accept Sati. She remembers how people had told her that she does not have any children to support her. She is also thinking about how she was told that this is the act of a dutiful wife who would want to follow her husband into the Afterlife. The priest is reading some holy incantations. Within no time, she is burnt alive with her deceased husband.

A few women are crying upon the state of plight and sadness of the wife while others are praising her and calling her righteous women. The wails of the women are shunned down with the incantations and the only thing left are the ashes of our heartless society'

This was a scenario of a voluntary act. In some cases, it is forced upon by the relative in a gruesome manner. The wife is either drugged or thrown into the fire. Or she is held down using bamboo sticks and forcefully made to perform this act. It is considered to be the highest form of the devotion of a wife towards her husband. It is believed that a good wife is the one who is ready to follow her husband even after death. If a woman does not have any children who can look after her, she is forced to do sati as a compulsion.