2. Interior of the Earth

Given below is the diagram of the interior of the earth which shows different layers inside the earth: 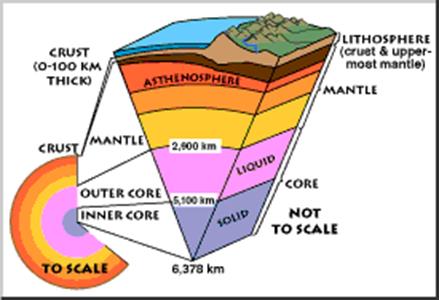 Structure of the earth:

1. The earth is believed to have a solid inner core made mostly of iron and nickel.

3. The crust is only a few tens of kilometers thick.

4. The region between the core and the crust is called the mantle. It is composed mainly of solid materials of the earth.

5. The upper part of the crust and the mantle together are called lithosphere.

• One would experience a high pressure which is at the center of the earth and extremely high because of all of the weight of the entire planet pushing inwards onto it.

Can we dig deep f

In which state of

How are igneous r

What is a volcano