i) Why could no f

a. Hydrogen has 1 valence electron (electron in the outermost shell)

b. This means hydrogen belongs to halogen family I which every element has 1 electron in the outermost shell.

c. But hydrogen does not have the properties of the halogen family.

e. Due to so much confusion, no fixed position can be given to hydrogen.

ii) a. Atomic radius goes on decreasing while going from left to right in a period because of the following reasons:

i. Within a period, the atomic number increases one by one as a result nuclear charge increases.

ii. The outer electrons are adding in the same valence shell.

iii. Due to the increased nuclear charge, the attraction of electrons by the nucleus increases.

iv. Therefore, the size of the atom decreases with the increase in atomic number (number of protons).

b. Atomic radius goes on increasing down a group because:

i. Down a group, the atomic number increases one by one as a result nuclear charge increases.

ii. The outer electrons are adding in a new valence shell.

iii. Therefore, the distance between the outermost electron (valence electron) and the nucleus is also increasing

iv. Therefore, the size of the atom increases with increase in atomic number. 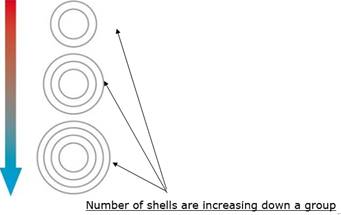 i) Mendeleev left some gaps in his Periodic Table. Instead of looking upon these gaps as defects, Mendeleev boldly predicted the existence of some elements that had not been discovered at that time. Mendeleev named them by prefixing a Sanskrit numeral.

ii) In periodic table, the electronic configuration of elements while moving from left to right in a period increases but the number of shells remain same.

How useful is this solution?We strive to provide quality solutions. Please rate us to serve you better.
PREVIOUS2 g of ferrous suNEXTDraw a diagram of
Related Videos

Na, Mg and Al are