i. Sleeping pills are taken by people who have anxiety problems and find it difficult to get sleep. Tranquilizer is the classification of the drug used in sleeping pills. Tranquilizers help to relieve stress and decrease fatigue in the body. They act on higher centres of the nervous system. Most of these drugs are derivatives of barbituric acid. Examples: Luminal, Equanil, iproniazid, barbiturate.

iii. Artificial sweeteners are chemicals that are used in the food to give a sweet taste. However, unlike natural sweetener, these neither add calories to our body nor cause harm to it. Some examples are saccharin, alitame and aspartame which are generally used to make sweet food for diabetic patients.

However, alitame is not recommendable as its sweetness is difficult to control. A small concentration of it can cause too much sweetness. It is said to be a high potent artificial sweetener.

Chloramphenicol can be used in the case of typhoid, dysentery, acute fever, urinary infections, pneumonia and meningitis.

ii. Disinfectants are antimicrobial agents that are applied to the surface of non-living objects to destroy microorganisms that are living on the objects. However, they are not safe to be applied to living tissues. They are generally used to kill microorganisms present in drain toilets, floors etc.

For example, Cetyltrimethyl ammonium bromide is a popular cationic detergent used in hair-conditioners. 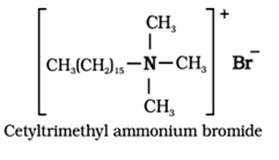 How useful is this solution?We strive to provide quality solutions. Please rate us to serve you better.
PREVIOUSWrite the sNEXT(i) Out of
Try our Mini CourseMaster Important Topics in 7 DaysLearn from IITians, NITians, Doctors & Academic Experts
Dedicated counsellor for each student
24X7 Doubt Resolution
Daily Report Card
Detailed Performance Evaluation
view all courses

What is the mode