i) What is a magn

i. (a) Magnetic field is a quantity that has both direction and magnitude.

(b) The direction of the magnetic field is taken to be the direction in which a north pole of the compass needle moves inside it.

(d) Thus, the magnetic field lines are closed curves. The relative strength of the magnetic field is shown by the degree of closeness of the field lines. The field is stronger, that is, the force acting on the pole of another magnet placed is greater where the field lines are crowded (see diagram). No two field-lines are found to cross each other. If they did, it would mean that at the point of intersection, the compass needle would point towards two directions, which is not possible.

i. A coil of many circular turns of insulated copper wire 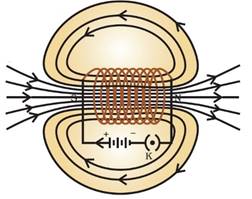 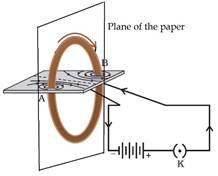 How useful is this solution?We strive to provide quality solutions. Please rate us to serve you better.
PREVIOUSi) Name the plantNEXTA person is unabl
Related Videos

A magnet AB is br

The shape of the

The north pole of

Which is the nort