(i) State the ess

The phenomenon that occurs when the light comes across the object and it obstructs is known as diffraction.

The essential condition for diffraction of light is given by,

• The wavelength of the light should always be comparable to the size of the object.

• In certain cases, it may occur is the size of the object is less than the wavelength of light.

Let a set of parallel rays from lens L1 allows to fall on the slit which then works as secondary source using Huygens’s principle. The resultant intensity is maximum.

The path difference at the point is given by,

General formula for nth maxima is,

(iv) The size of the central band is given by,

Thus, size of central band reduces to half.

(i) The schematic ray diagrams of astronomical telescope are, 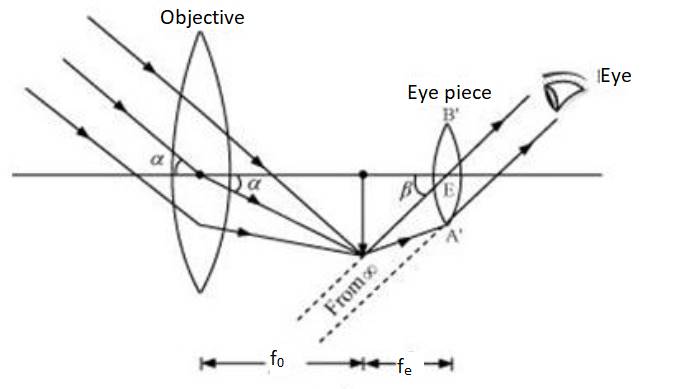 (ii) There are two types of aberrations of reflecting telescope:

It is the defect in the lens that result in the focusing of the beam of light on the point after passing through the spherical surface.

It is the defect in the lens which results in the formation of the blurred and coloured image.

• The resolving power of the telescope increases if the frequency of the incident light is increased.

• The resolving power of the telescope does not change if the focal length of the objective is increased.

• The resolving power of the telescope halved if the aperture of the objective is halved.

For the same obje