Explanation: In SN1 reactions, reactivity depends on the stability of carbocation. Carbocation is same here, therefore, we will see the reactivity of leaving group. I- is a better leaving group because of being good nucleophile. Hence Sn1 reaction is faster in (CH3)3-I 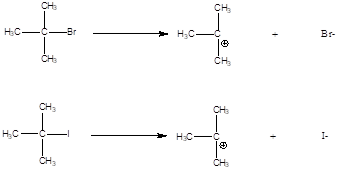 What is the mode