i) Name the plant

When the movement in plants is growth dependent then it is called tropic movement. It is a directional movement in response to stimulus. For example:

Phototropism- Movement towards the direction of light. Example: Movement of shoot of plant upwards towards light.

Auxin hormone is synthesized at the shoot tip. Plant shoot bend towards light during its growth because plant hormone named auxin is present at the tip of shoot.

It is a growth promoting hormone.

• The primary function of the auxin hormones is to elongate plant cells in the stem. Auxin by some mechanism breaks the bonds holding its cellulose fibers together. These broken bonds give the cell wall greater flexibility and expandability, so that more water can enter the cell by diffusion, causing the cell itself to elongate.

• Inhibition of lateral branching, and fruit development. In fact, seedless fruits can be artificially created by applying synthetic auxin to plants; this causes fruit to develop even though fertilization (and thus seed formation) has not occurred.

It can be explained by help of this diagram. This kind of movement is induced by light. The stem mostly grows and turns towards the source of light, therefore it is said to be positively phototropic. Auxin distribution controls phototropism. 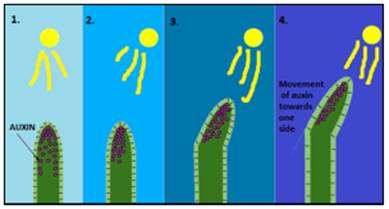 This unequal distribution of auxins on the two sides may be due to following two reasons:

• Translocation of auxins from illuminated side to the shaded side.

Inhibition of auxin synthesis in the illuminated side (light side).

iii. The pathway of the reflex action is called Reflex arc. Reflex action is any spontaneous, involuntary and automatic response to a stimulus to protect us from harmful situations. For e.g. when a person touches a hot plate a sudden action leading to withdrawal of hand occurs in a certain manner, this path of manner determines the reflex arc.

The sequences of events occurring when we step on a sharp object are:

• Nerve endings located in the leg identifies the irritant entered in the foot.

• Receptor sends the information or nerve impulse to the sensing (recognition) centre located in the brain stem.

• Brain stem sends instructions to the leg muscles for response.

• The muscle cells move by contraction and relaxation by utilizing the energy in the form of ATP. Muscle contraction is initiated by signals sent by the CNS to the muscle fibres. During contraction, the muscles fibres shorten, the muscle pulls on the ligaments that connect the bones and the movable body parts.

• Leg is moved apart from the sharp zone. 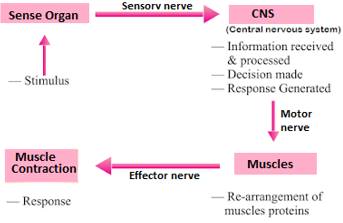 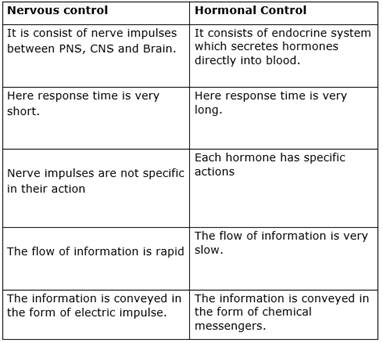 Human Brain: It is enclosed in cranium (brain box) and is protected by cerebrospinal fluid which acts as a shock absorber. Human brain has three major parts or regions: (a) Fore-brain (b) Mid Brain (c) Hind Brain. 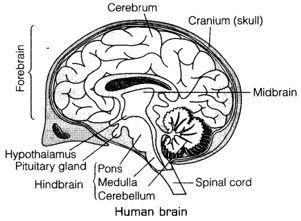 They also have components: 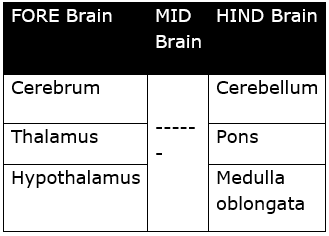 It is the most complex/specialized part of the brain.

(i) Main thinking and largest part of the brain.

a) Sensory area- to receive impulses from sense organs via Receptors

(B) Thalamus – It relays sensory information to the Cerebrum.

(C)Hypothalamus- It forms the link between Nervous system & Endocrine system.

â Mid brain- It connects the fore-brain with the hind-brain. It is the portion of the central nervous system associated with vision, hearing, motor control, sleep/wake, arousal (alertness), and temperature regulation.

b) Pons- Acts as a bridge between brain & spinal cord

The cerebellum receives information from the sensory systems, the spinal cord, and other parts of the brain and then regulates motor movements. The cerebellum coordinates voluntary movements such as posture, balance, coordination, and speech, resulting in smooth and balanced muscular activity.

In case of damage to the cerebellum, while not causing paralysis or intellectual impairment, might lead to a lack of balance, slower movements, and tremors (shaking). Complex physical tasks would become unsteady and halting.

How useful is this solution?We strive to provide quality solutions. Please rate us to serve you better.
PREVIOUSi) Write a chemicNEXTi) What is a magn
Related Videos

What are the majo

Which part of the

i) Name the plant