• Rate constant of a reaction depends on temperature and it is said that rate constant increases almost doubly for evey increase of 10 ◦ of temperatureand this dependency can be expressed quantitatively by Arrhenius equation :

• To represent this relationship graphically we have to reform the equation as :

By taking ln on the both sides we get, 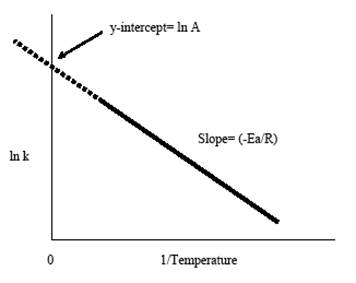 • From the given plot the order of the reaction should be of zero order.

• Because, the concentration of R ,

[R] varies with time which is shown by the plot. And that means the rate of the reaction is actually proportional to the concentration of reactant R (zero power on [R] ).

• The dimension of the rate constant for the reaction is concentration/time hence, unit = M/s.

• The rate expression for the given zero order reaction is ;

where, a = initial amount of the reactant and a-x denotes final amount until the reaction is taken into consideration.

Note: In the foll