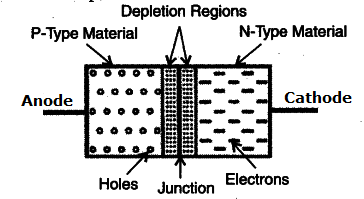 The formation of the p-n junction is due to the concentration gradient difference across p-side and n-side. It involves the diffusion of the holes from the p-type semiconductor to the n- type and the diffusion of electrons from n-type to p-type. When an electron diffuses it leaves an immobile positive charge and when a hole diffuses it leaves and immobile negative charge. The diffusion of these carriers occur continuously across the junction .This causes a layer of immobile positive and negative charges on both the sides of the junction. The layer is known as the depletion layer or region. 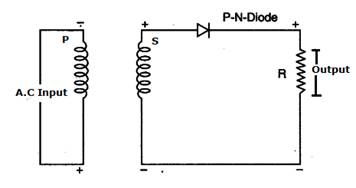 When an AC input is applied across the primary coil, there is a corresponding potential difference developed across the ends of the secondary coil. We consider that in half cycle of input signal, the end with the positive sign acts as positive and other acts as negative end of the battery.The diode is thus forward biased and we get an output across the resistor .

In the second cycle of the input AC signal the parity of the secondary coil reverses and hence, the diode is in reverse bias and thus a zero output is obtained across load resistor due ti a very high resistance by the diode.

Since, we get the output for half cycle of the input ac signal, the diode is thus called half-wave rectifier. 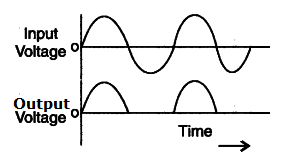 How useful is this solution?We strive to provide quality solutions. Please rate us to serve you better.
PREVIOUS(i) When an AC soNEXT(i) Which mode of
Try our Mini CourseMaster Important Topics in 7 DaysLearn from IITians, NITians, Doctors & Academic Experts
Dedicated counsellor for each student
24X7 Doubt Resolution
Daily Report Card
Detailed Performance Evaluation
view all courses