(i) IONIC COMPOUND: (a) Formed due to the electrostatic force of attraction that is, electrovalent bond.

(c) Conduct electricity only in a molten state as it forms ions.

COVALENT COMPOUND: (a) Has covalent bond between constituents due to polarity.

(c) Does not conduct electricity.

(ii) There are two main methods of extracting metals from their ores: 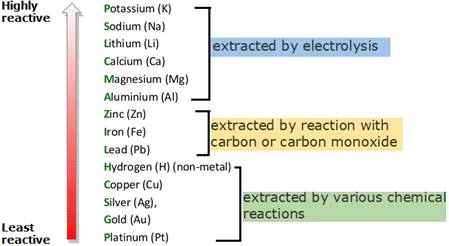 The metals less reactive than carbon can be extracted from their ores by reduction.

For example, the extraction of lead from lead oxide:

(b) Metal N which is high up in the reactivity series –

Metals above carbon in the reactivity series must be extracted using electrolysis.
For example, when an electric current is passed through molten state or solution of sodium chloride, sodium metal deposited over the cathode.

Metals obtained from the process of electrolytic reduction are pure in form.

(ii)Write a chemical equation to illustrate the use of aluminum for joining cracked railway lines.

This is an exothermic reaction which includes the igniting aluminum and ferric oxide.

Iron obtained in this process is in a molten state. Refining of copper by electrolysis

How useful is this solution?We strive to provide quality solutions. Please rate us to serve you better.
PREVIOUSAB is a current-cNEXTA salt X is forme
Related Videos

i. Give an exampl

In one of the ind