(i) Discuss the s

(i) Dipole moment plays a very important role in understanding the nature of the chemical bonds.

A few applications are given below:

(ii) The diagrammatical representation of bond moments and the resultant dipole moment in CO2, NF3, and CHCl3 are: 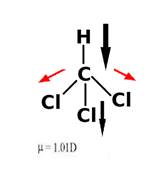 What were the res

Did the boys retu