(i) Derive an exp

E is the electric field as shown in the figure,

‘e’ is the charge on an electron

‘m’ is the mass of the electron. 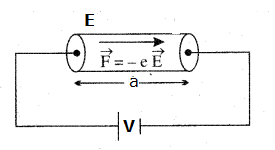 Thus, the velocity of the free charge carrier .i.e. electron in time interval t1 is,

The final velocities for the n charge carriers is supposed to be v2, v3, …. vn. The average velocity or the drift velocity (vd) of the free electrons thus is,

we put the values of final velocity from (2) to get,

We also know that the electrons were initially at rest, the average initial velocity is thus zero.

τ is defiend as the relaxation time.

putting the value from (1) we get,

This is the required drift velocity.

How useful is this solution?We strive to provide quality solutions. Please rate us to serve you better.
PREVIOUS(a) Write the basNEXT(i) When an AC so
Try our Mini CourseMaster Important Topics in 7 DaysLearn from IITians, NITians, Doctors & Academic Experts
Dedicated counsellor for each student
24X7 Doubt Resolution
Daily Report Card
Detailed Performance Evaluation
view all courses