(i) Derive an exp

i) Let us consider a metallic of conductor of cross-sectional area A, electron density n, and let e be the charge of an electron. Consider vd to be the drift velocity of the of the electrons. Consider an electric field E is applied to the conductor, and so the acceleration of the electron will be defined as,

Where me is the mass of the electron. So, velocity gained by the electron in infinitesimally small time Δt, is,

Where vi is the initial velocity of the electron, averaging this term for all the electrons present, we get the drift velocity vd,

Let there be a steady state current I in the conductor. Now consider a segment of conductor of length Δx, the net charge flown through this volume of the conductor in time Δt, is I Δt, which can be written in terms of drift velocity as,

Equating both the expressions we get,

Thus, we get ohms law verified.

ii) A wire whose cross-sectional area is increasing linearly from its one end to the other, is connected across a battery of V volts.

A. drift speed of the electrons is decreasing as it is inversely proportional to the area.

B. current density is also decreasing as the area is increasing as it is defined as the current per unit area of cross section of the conductor

C. electric current remains constant as it does not depend upon the area of cross section rather the resistance of the conductor and the potential difference applied determines how much current will flow.

D. electric field will also decrease as it depends on current density which is also decreasing,

i) The Kirchhoff’s Rules: -

b) Voltage rule/ loop rule: - Loop rule: The algebraic sum of changes in potential around any closed loop involving resistors and cells in the loop is zero.

The justification for current rule is that when the, circuit reaches the steady state after the switch is turned on, no charges are accumulating at any given point in the circuit and thus charges from leaving any point is equal to charges reaching at that point, which implies that the summation of all the currents at the given node is always zero, where incoming currents towards the node are taken to be positive and outgoing currents from the node are taken to be negative.

The justification for the Voltage rule comes from the law of conservation of energy, i.e., if we are moving in a closed loop and reach the point where we started then the net loss of potential must be zero or the voltage drops occurred in the closed loop must be equal to the source voltages occurred in the that very closed loop.

Now, the two resistors of r/2 are in series, so the net equivalent resistance of the branch ACB will be. 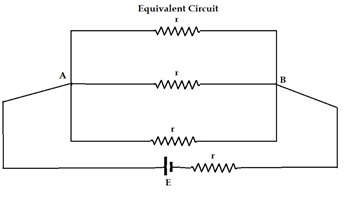 The equivalent resistance AB for the above question is three resistance in parallel combination. 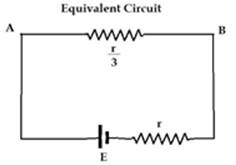 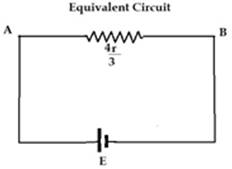 The net resistance is,

So, the net current drawn from the battery is,

Also, the power consumed in the circuit can be given by the formula,

Net current in the circuit,

Net power consumed by the circuit,