The velocity with which the charge particle move or drift towards the positive terminal of the conductor, when under the influence of the electric field.

The formula for the drift velocity can be written as

And the current that flows in the conductor is

is the drift velocity, e is the charge, E is the electric field, m is the mass of the charge/electron, t is the time difference after electrons collide or the relaxation time, A is the area of the conductor, n is the number of charge.

Now finding the resistance, R which can be written as

Placing the value of current, I as

In the above formula the value of

, then the resistance can be written as

Hence, the resistivity is

The resistivity of the conductor depends on

1. Resistivity is inversely proportional to the number of free electrons in the conductor volume.

2. Resistivity depends inversely on the time of electron relaxation after collision.

Alloys like constantan and manganin are used for making standard resistors because of high resistivity and low temperature coefficient.

The potential difference between two current carrying points with a wire having uniform area and substance, the potentiometer reading is directly proportional to the length of the wire.

A potentiometer circuit diagram Fig 26.2 is given as 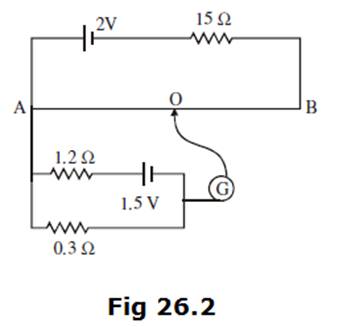 , the resistance on the circuit wire AB is

To find the length AO, we use the formula of potential difference which states the ratio of Voltage upon Resistance.

is the potential difference,

is the resistance on the wire AB, V is the voltage supplied.

The potential difference across the wire with

The potential difference across AO with

Therefore, the length of the wire AO is