i. A. Pole-The center of the reflecting surface of a spherical mirror is a point called the pole. It lies on the surface of the mirror. The pole is usually represented by the letter P.

C. Principle Axis- The imaginary line which connects the pole to the center of curvature is called the principle axis.

D. Principal Focus- A number of rays parallel to the principal axis are falling on a spherical, reflected rays are all meeting/intersecting (or intersects when extended backwards and/or forward) at a point on the principal axis of the mirror. This point is called the principal focus of the concave mirror

i. The mirror is concave mirror as a concave mirror makes a magnified virtual image of the object when it is placed between the focus and pole of the mirror. The image is virtual, erect and magnified. 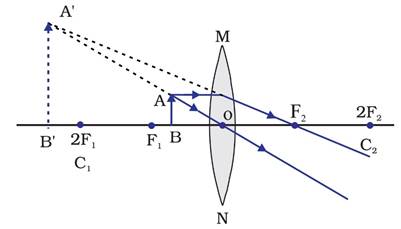 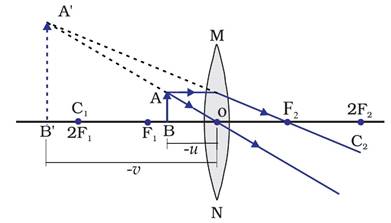 The lens formula is

where v is the image distance, u is the object distance, f is the focal length (both as per the sign convention). For the above situation the formula can be written as,

iii. The data given is:

the object distance is,

the magnification is, m

we know that the magnification for lens is given by the formula ,

So, after substituting the data we have,

, where the symbols have the usual meanings.

Substituting the given and founded data, we can write,

We know that power of a lens is the reciprocal of the focal length in metes,

How useful is this solution?We strive to provide quality solutions. Please rate us to serve you better.
PREVIOUSi. Write the funcNEXTi. Two identical
Related Videos

A convex lens of

When two or more

State the laws of

The image of an o

What is the power