i) Electromagnetic induction is the generation or creation of electromotive force across an electrical conductor when there is a change in the magnetic field. 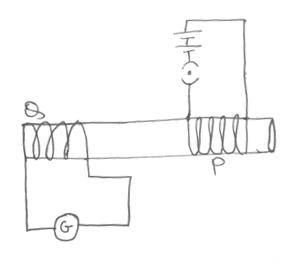 B. As current continues to flow in coil P, there is no change in magnetic field or rather the magnetic flux does not change hence galvanometer shows no deflection.

C. When current in coil P is stopped by removing the key, current reaches to the zero value thus changing the associated magnetic field too due to change in current. This would bring about change in magnetic field around coil Q, electrical current gets induced and hence galvanometer shows deflection.

The activity to plot the magnetic field lines around the bar magnet employes iron fillings, iron fillings are used because iron is a magnetic material and it gets attracted by a magnet. The following steps are executed to demonstrate the activity: -

1. Fix a sheet of white paper on a drawing board using some adhesive material.

2. Place a bar magnet in the centre of it.

3. Sprinkle some iron filings uniformly around the bar magnet. A salt-sprinkler may be used for this purpose.

4. Now tap the board gently. 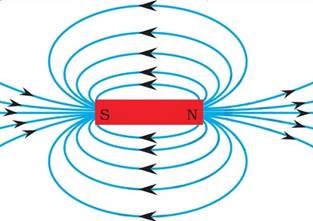 How useful is this solution?We strive to provide quality solutions. Please rate us to serve you better.
PREVIOUSi. List the partsNEXTi. What is ‘Chipk
Related Videos

What will the pol

In the simple ele

Which way does th

H the current in

Which way does th