b. An action potential never travels to the brain for processing and so results in a much quicker reaction.

When a stimulus is encountered, the signal from that stimulus will travel up the sensory neuron to the spinal column. There, it will likely pass 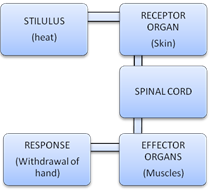 through a short interneuron before continuing down a motor neuron to the origin of the signal. Then, a contraction of the muscles is triggered, moving the hand. c. Dendrites of the neutron receive the information and it is nothing but it requires information that are part of the neuron family.

Likewise, the Axon of the neuron information travels as fast as electrical impulse taken by the dentritis action.

It has been emerged with neuron information and travels through the Axon. 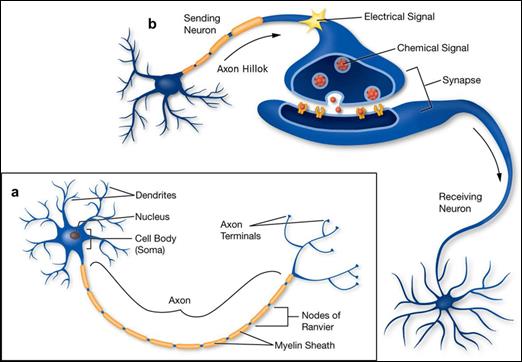 When neurons receive or send messages, they transmit electrical impulses along their axons, which can range in length from a tiny fraction of an inch to three feet or more. Many axons are covered with a layered myelin sheath, which accelerates the transmission of electrical signals along the axon.

It can be explained by help of this diagram. This kind of movement is induced by light. The stem mostly grows and turns towards the source of light, therefore it is said to be positively phototropic. Auxin distribution controls phototropism. This unequal distribution of auxins on the two sides may be due to following two reasons:

(i) Translocation of auxins from illuminated side to the shaded side.

(ii) Inhibition of auxin synthesis in the illuminated side (light side).

They are many kinds of plants of which the climbers and creepers are considered movable plants. While creepers are plants that spread on the ground and climbers need a support structure for their growth. The support could either be a structure, a plant or a tree. Grapes, members of squash, melon family, cucumber and sweat pea are few examples of common tendril producing plants.

Certain vines use tendrils to climb towards the sun. Tendrils are specialized shoots, leaflets or leaves that are highly sensitive to touch. The effect of tendrils is to move the plant towards an object that it can cling to. So tendrils provide the plants a way of changing its position. As soon as it makes contact with a firm support, it secures its tight hold with a great speed. Growth on the side of origin of the tendril touching the support virtually stops but on the other side it may some 200 times as fast as normal. 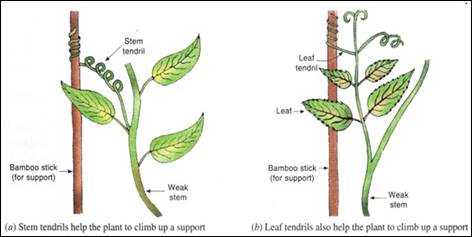 When they form initially, they are almost straight. Then while growing it waves around. This process is called circumnutation. The direction of cirumnutation could be clockwise or counter clockwise depending on the species. The tip of the tendril is sensitive to auxin which is a growth stimulating chemical hormone. Auxin causes the tendrils to coil getting involved in the asymmetrical growth around the support

ii. The growth of a plant part due to chemical stimulus is known as chemotropism

An example of chemo-tropic movement can be seen during the growth of the pollen tube, where growth is always towards the ovules. It can be also written that conversion of flower into fruit is an example of chemotropism. 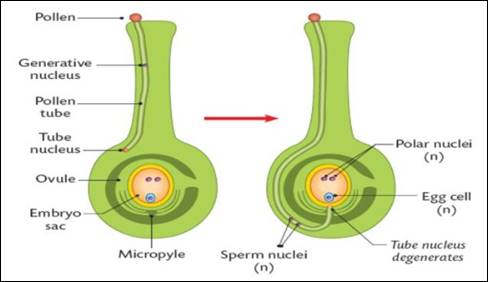 Fertilization of flowers by pollen is achieved because the ovary releases chemicals that produce a positive chemo-tropic response from the developing pollen tube.

How useful is this solution?We strive to provide quality solutions. Please rate us to serve you better.
PREVIOUSWhy certain compoNEXTi. A student suff
Related Videos