1. Matter in Our Surroundings

How will you determine the melting point of ice experimentally with the help of a neat and labelled diagram?

i) Take around 10-15 ice cubes in a glass beaker and arrange it on a tripod stand with the burner below it.


ii) Suspend a thermometer in the beaker in such a way that the bulb is in contact with the ice cubes. A clamp stand could be used to hold the thermometer and shown in the diagram.


iii) Switch on the flame of the burner and keep checking the readings on the thermometer.


iv) Record the initial temperature when the ice has just started to melt.


v) Constantly keep stirring the melting ice cubes and record the temperature when the ice has completely melted into liquid water. 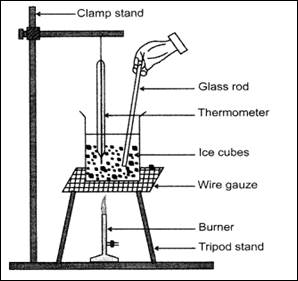 
The melting point of ice is the temperature at which ice gets converted from its solid state to its liquid state. For this, the solid ice needs energy to break the forces of attraction between the ice particles so that the particles can be separated and the intermolecular space between them can increase. This energy is provided in the form of heat and is known as the latent heat of fusion.


In the experiment demonstrated above, the heat from the burner is used to melt the ice. The thermometer helps to note the temperature at which the ice melts. After the initial and final readings are recorded, it can be observed that there has been no change in the temperature while the ice has been melting. The reading showed 0°C (273.15K) at the beginning and remained the same when all the ice had melted. The reason for this is the latent heat of fusion which is the energy that does not raise the temperature but at the same time increases the kinetic energy to break the bonds between in the ice particles.

How useful is this solution?We strive to provide quality solutions. Please rate us to serve you better.
PREVIOUSHow will you determine the boiling point of water experimentally? Draw a neat and labelled diagram. NEXTName A, B, C, D, E and F in the following diagram showing changes in state:
Related Videos

Why is it advisable to use pressure cooker at higher altitudes for cooking food?

Intermolecular forces of attraction are least effective in:

The property to flow is unique to fluids. Which one of the following statements is correct?

Solids are very rigid and cannot flow from one place to another.

Describe by experiment the relationship between the rate of diffusion and density of the liquid.

A. Water at room temperature is a liquid.

B. Naphthalene balls disappear with time without leaving any solid.

C. We can get smell of perfume several metres away.

You are given the following substances with their boiling and melting points.

Point out the physical states of A, B and C at room temperature (30°C).

Together with Science 578 views
Q