1. Matter in Our Surroundings

How will you dete

i) Take around 100ml of water in a glass beaker and arrange it on a tripod stand with the burner below it.


ii) Suspend a thermometer in the beaker in such a way that the bulb is in contact with the water. A clamp stand could be used to hold the thermometer and shown in the diagram.


iii) Switch on the flame of the burner and keep checking the readings on the thermometer.


iv) Record the initial temperature when the water is just beginning to heat up.


v) Keep monitoring the temperature change in the thermometer while the water is heating up further.


vi) After a while, notice the vapours coming out of the boiling water. Record the temperature till half of the water has evaporated.


vii)Notice that the temperature in the thermometer will not rise above 100°C. 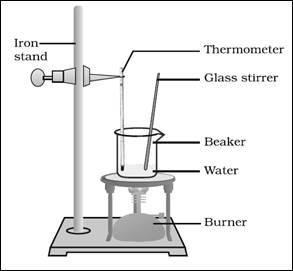 
The boiling point of water is the temperature at which the liquid water gets converted into its gaseous form of water vapour. The energy for this conversion is provided in the form of heat and is known as the latent heat of vaporisation.


The temperature at which the water in the beaker was seen to evaporate is 100°C or 373.15K. This is the boiling point of water.

How useful is this solution?We strive to provide quality solutions. Please rate us to serve you better.
PREVIOUS(i) Give reNEXTHow will you dete
Related Videos