Nervous tissue is the main component of the nervous system, which regulates and controls body functions. It is specialized to react to stimuli and to conduct impulses to various organs in the body which bring about a response to the stimulus.

Nervous tissue is composed of neurons, which transmit impulses, and the neuroglia, which assists propagation of the nerve impulse as well as provide nutrients to the neuron. Neurons are easily stimulated and transmit impulses very rapidly.

Nerve cells communicate with each other at a junction known as a synapse, where the terminal branches of an axon and the dendrites of another neuron lie in close proximity to each other but normally without direct contact. Information is transmitted across the gap by chemical secretions called neurotransmitters. It causes activation in the post-synaptic cell. Thus impulses pass from one neuron to the next.

Nervous tissue allows an organism to sense stimuli in both the internal and external environment. 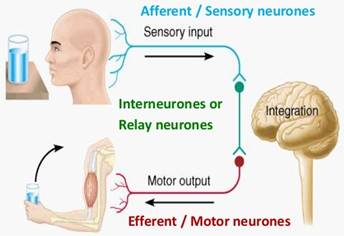 The stimuli are analyzed and integrated to provide appropriate, co-ordinate responses in various organs.

• The afferent or sensory neurons (example: Eyes) conduct nerve impulses from the sense organs and receptors to the central nervous system (Brain).

• Connector neurons (Inter-neurons) supply the connection between the afferent and efferent neurons as well as different parts of the central nervous system.

• Efferent or somatic motor neurons transmit the impulse from the central nervous system to a muscle (the effector organ) which then reacts to the initial stimulus.

• Autonomic motor or efferent neurons transmit impulses to the involuntary muscles and glands causing the response (Picking the glass of water).

(a) What is meant