It proved that dwarfness which was lost in F1 generation, reappeared in F2 generation.

(b) Traits were inherited independently: A cross was made between pure breeding pea plants, one with round and green seeds and the other with wrinkled and yellow seeds. The Phenotype in F1 progeny is yellow and round shape because they are dominant over green and wrinkled seeds, in F1 progeny which can be shown as follows: 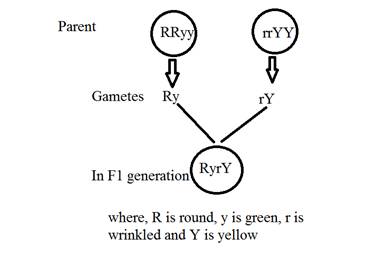 (c) When F1 progeny was salted, the following progeny along with the ratio will be obtained:

This proves that traits are inherited independently and made new characteristic combination which was independent of earlier.

New species may b