The interaction between electricity and magnetism is called the electromagnetism and this relation has changed the lifestyle of the mankind in the following ways:

1. Electromagnets = placing iron bar inside the coil of wire and passing the current makes an electromagnet. It is 100 times powerful than a normal magnet. And is used to lift heavy weights. As shown in the figure. 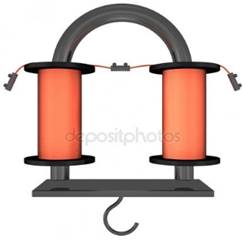 2. Electric motors = The rotation of the coil due to the magnetic field generated mechanical energy which can be used in many forms. Like in Mixers, Water pump etc.

As shown in figur

Give a few applic