How did Mendel in

We will take case of monohybrid inheritance.

(ii) He then crossed the tall plants of the first generation and found that tall plants and dwarf plants were obtained in the second generation in the ratio of 3:1. In other words in F2 generation, three fourth plants were tall and one fourth was dwarf.

(iii) Thus he concluded that the dwarfness was not lost but was merely suppressed in first generation that appeared again in the second generation. He called this repressed trait as ‘recessive trait’ and expressed the tallness trait as the ‘dominant trait’ .

(iv) Also it was observed that the traits in the first generation were either tall or dwarf but were not intermediate. In this way it was specified that the traits are inherited independently. The ratio 3:1 is known as the monohybrid ratio. 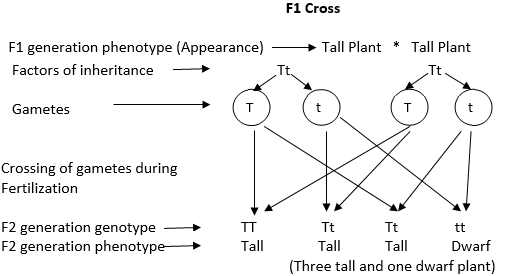