How did Mendel ex

When Mendel crossed pure tall (TT) pea plants with a pure dwarf (tt) pea plants, in the F1 generation he found that all pea plants were tall (Tt). There were no dwarf plants produced in an F1 generation. When he self-pollinated these F1 plants, in the F2 generation he obtained tall and dwarf plants in the ratio 3:1. Thus as three-fourths of the plant in an F2 generation are tall and one-fourth is dwarf so tall is a dominant trait whereas dwarf is a recessive trait [ which expressed itself only in homozygous condition]. The dwarf trait was inherited in an F1 generation but it does not get expressed, it remains suppressed in presence of dominant trait tall. 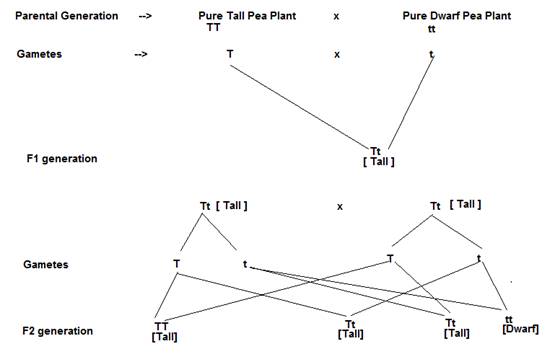 How useful is this solution?We strive to provide quality solutions. Please rate us to serve you better.
PREVIOUSList three techniNEXT‘‘Evolution and c
Related Videos