How can you find the center of gravity of an India map made of steel? Explain.

1. Take the map and make three holes along its edge.

2. Suspend the map freely from one hole by using the thread as shown in the figure below. 3. Take a plumb bob and suspend it from the same hole.

4. Draw a line along the thread. It indicates the line of weight at that point. As shown in the figure below. 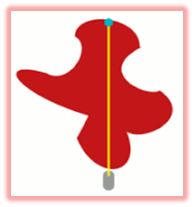 5. Repeat the same from remaining holes and draw other two lines of weight.

6. The concurrent point of the three lines is the Center of gravity of the map.

How useful is this solution?We strive to provide quality solutions. Please rate us to serve you better.
PREVIOUSThe bob of a simple pendulum of length 1 m has mass 100g and a speed of 1.4 m/s at the lowest point in its path. Find the tension in the string at this moment.NEXTExplain some situations where the center of gravity of man lies outside the body.
Related Videos

What is Upthrust and Buoyancy?40 mins

Variation of Acceleration due to Gravity39 mins

Become a Master in Universal Law of Gravitation !!47 mins

Where does the center of gravity of the atmosphere of the earth lie?

Explain some situations where the center of gravity of man lies outside the body.

Where does the center of gravity lie, when a boy is doing sit-ups? Does weight vector pass through the base or move away from the base? Explain.

How can you find the center of gravity of an India map made of steel? Explain.