How are human activities contributing to global warming?

When the energy from Sun falls on earth, the same amount of energy gets reflected back into space, but few amounts of the energy are trapped by the atmosphere. This keeps the earth warm and keeping us warm is the most important thing that the atmosphere does. This trapping of energy is called the Greenhouse effect.

since 19th century this cooling and warming process has been occurring rapidly. These rapid changes may lead to catastrophic events. This increase in warming is mostly due to the rise in industries, the smoke and gases released from these industries are increasing the warming events. Hence this current global warming trend is also called as Anthropogenic (caused by Humans) Global warming.

How useful is this solution?We strive to provide quality solutions. Please rate us to serve you better.
PREVIOUSWrite a short note on factors influencing climatic variations in hilly areas and deserts.NEXTWhat are the disagreements between ‘developed’ and ‘developing’ countries about AGW?
Related Videos

Glimpses of India: A Baker from Goa42 mins

Glimpses of India: A Baker from Goa39 mins

Glimpses of India - A Baker from Goa38 mins 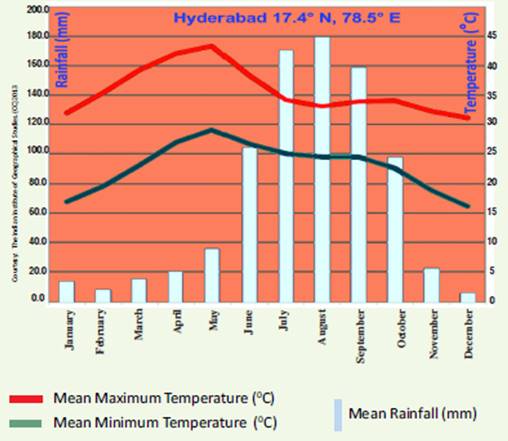 A. Which month received the highest rainfall?

B. Which months experience the highest and the lowest temperature?

C. Why does the maximum amount of rainfall happen between June and October?

D. Why is the temperature high between March and May?

How are human activities contributing to global warming?

What are the disagreements between ‘developed’ and ‘developing’ countries about AGW?

On an outline map of India, show the following:

(i) Areas recorded with more than 400C annual mean temperature

(iii) The direction of the south-west monsoon over India.

Match the following. Use maps if you cannot locate the places. (There could be multiple correct answers)

c) Anantapur → is closer to sea, and the climate has a big impact on the seas

a) During the last few years, many glaciers have melted in Himalayas

b) During the last few decades, drought in Vidarbha region has increased

All In One Science 877 views
Q