(i) Resistors are in parallel when each resistor is connected directly to the voltage source by connecting wires having negligible resistance. Each resistor thus has the full voltage of the source applied to it.

Resistors are in series whenever the flow of charge, called the current, must flow through devices sequentially. 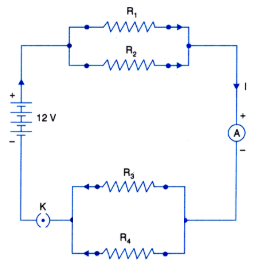 Major Features of Resistors in Series

2. The same current flows through each resistor in series.

3. Individual resistors in series do not get the total source voltage, but divide it.

Major Features of Resistors in Parallel

2. Each resistor in parallel has the same full voltage of the source applied to it. (Power distribution systems most often use parallel connections to supply the myriad devices served with the same voltage and to allow them to operate independently.)

3. Parallel resistors do not each get the total current; they divide it.

How useful is this solution?We strive to provide quality solutions. Please rate us to serve you better.
PREVIOUSAt what distance NEXTState the rule to
Related Videos