Given alongside is a portion of the human body showing some important structure in ventral (front) view. 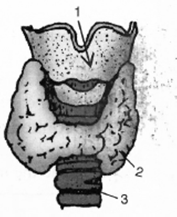 (a) Where is this portion located in the body?

(c) State one main function of each of the structures named above.

(d) Is there any duct to carry the secretion from the structure numbered 2? If so, give its name.

(a) Thyroid gland is located in front of the neck just below the larynx.

(c) The main function of the larynx is to produce sound hence it is called voice box.

The trachea is a part of the respiratory tract which helps in the passage of air during breathing. It is also called as windpipe.

(d) No, thyroid gland has no duct as it is a ductless gland. It pours its secretion directly into bloodstream.

How useful is this solution?We strive to provide quality solutions. Please rate us to serve you better.
PREVIOUSStudy the diagram given below and then answer the questions that follow:(a) Name the cells of the pancreas that produce (1) glucagon (2) insulin.(b) State the main function of (1) glucagon and (2) insulin.(c) Why is the pancreas referred to as an exo-endocrine gland?(d) Why is insulin not given orally but is injected into the body?(e) What is the technical term for the cells of the pancreas that produce endocrine hormones?(f) Where in the body is the pancreas located?NEXTGiven alongside is an outline diagram of a human body showing the position of certain organs.(a) Name the parts numbered 1 to 4.(b) What is common to all these parts in regard to the nature of their function?(c) Name the nutrient element which is essential for the normal working of part 2.
Related Videos

Do we come across persons like Lutkins only in fiction or do we encounter them in real life as well? You can give example from fiction, or narrate an incident that you have read in the newspaper, or an incident from real life.

Do you think the lawyer was gullible? How could he have avoided being taken for a ride?

Answer the following questions in about 120 words.

Suggest the initiative taken by the government to ensure the increase in agricultural production.

Answer the following questions in 30 words:

The land under cultivation has got reduced day by day. Can you imagine its consequences?

Answer the following questions in about 120 words.

Describe the impact of globalisation on Indian agriculture

Answer the following questions in 30 words:

Enlist the various institutional reform programmes introduced by the government in the interest of farmers.