Give the schematic r

Tricarboxylic acid cycle, more commonly called as Krebs’ cycle after the scientist Hans Krebs.
The TCA cycle consists of the following steps:
1. The TCA cycle starts with the condensation of acetyl group with oxaloacetic acid (OAA) and water to yield citric acid.
2.  The reaction is catalysed by the enzyme citrate synthase and a molecule of CoA is released.
3.  It is followed by two successive steps of decarboxylation, leading to the formation of α-ketoglutaric acid and then succinyl-CoA.
During the conversion of succinyl-CoA to succinic acid a molecule of GTP is synthesised. This is a substrate level phosphorylation.
4.  In a coupled reaction GTP is converted to GDP with the simultaneous synthesis of ATP from ADP.
The summary equation for this phsae of respiration may be written as:
Pyruvic acid + 4 NAD+ + FAD+ + 2H2o + 2H2O + ADP + Pi -------Mitochondrial Matrix------>  3CO2 + 4NADH + 4H+ + FADH2 + ATP 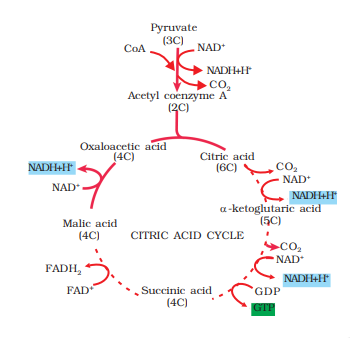 How does a muscle

Find the mean and

What does the not