i) Most zygotes in angiosperms divide only after certain amount of endosperm is formed because endosperm is the nutrition which the zygote will need at the time of maturation.

v)Apple and cashews are not called true fruits as they do not develop from ovary instead develop from thalamus thus are called as false fruits.

• Embryo develops at the micropylar end of the embryo sac where the zygote is situated. Most zygotes divide only after certain amount of endosperm is formed.

• Embryos of monocotyledons have only one cotyledon. In the grass family the cotyledon is called scutellum that is situated towards the lateral side of the embryonal axis.

• At its lower end, the embryonal axis has the radical and root cap enclosed in an undifferentiated sheath called coleorrhiza.

• The portion of the embryonal axis above the level of attachment of scutellum is the epicotyl.

• Epicotyl has a shoot apex and a few leaf primordia enclosed in a hollow foliar structure, the coleoptile. 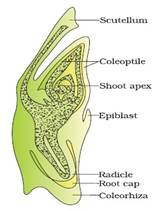 b) i) Anthers of angiosperm flowers are described as dithecous because of the bilobed structure and each lobe containing two theca.

ii) Hybrid seeds have to be produced year after year because in the progeny of the hybrid seeds the characters get segregated according to Mendel’s Law Of Seggregation and the required qualities in the progeny are lost and new combinations are formed.